Help! There’s a Vegan Coming for Dinner! What to Serve Your Vegan Guests (With Next to No Effort) 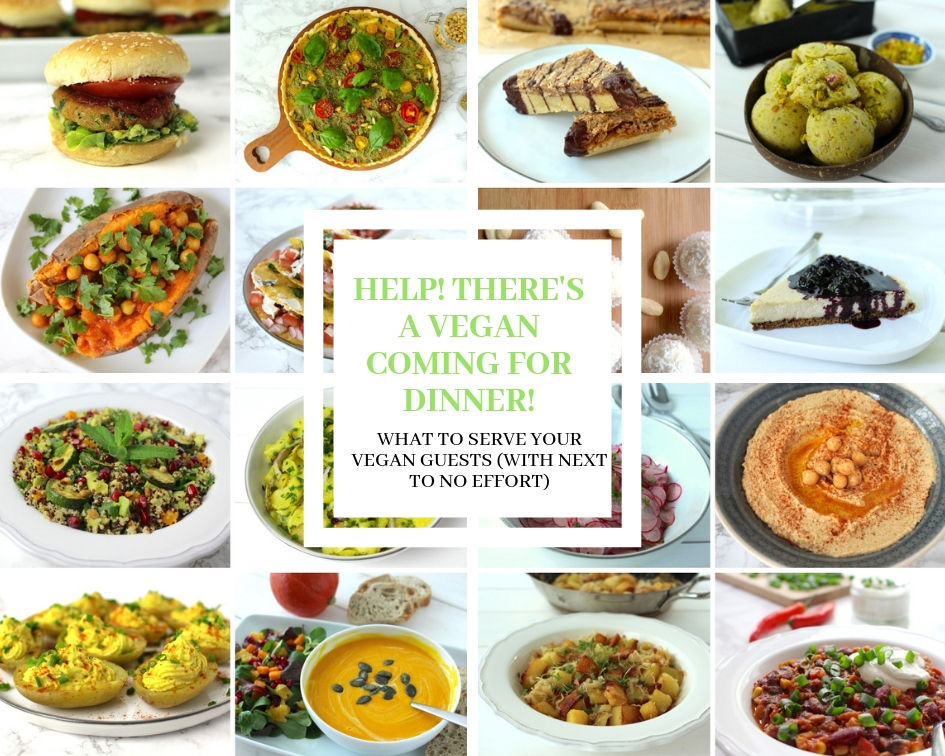 No matter if it’s for ethical, ecological or health reasons (or all of them combined): more and more people are going plant-based/ vegan. Therefore the likelihood of having a vegan at your dinner table increases. What to do if your nephew or the grandchild’s girlfriend refuses to eat your meatloaf? What does a vegan eat anyway? Here you’ll find the answers and some ideas for meals you could prepare without a lot of extra effort (or even any extra effort at all).

Disclaimer: This post is not meant to constitute some kind of expectation that I or anyone who eats a plant-based diet has of their host. If you want to give your guests – who for whatever reason eat a certain or different kind of way – a treat, you can find some suggestions on how to in this article. And no, it doesn’t require a three-course menu and it doesn’t even have to be so very obvious (meaning without a special treatment).

At the very beginning of my dietary change, we visited my boyfriends family where they would serve coffee & cake, and later dinner. The cakes would all be made with eggs/ butter/ cream/ milk, and for dinner, there was typical German good traditional fare: cold cuts, cheese in every variation possible, sausage salad, egg salad, and butter. There was neither a salad (without eggs or sausage) nor fruit or vegetables. I settled to bread and butter eventually since everything was served already and I didn’t want to make a lot of fuss. Since that day, I always bring my own food – even if it’s just an avocado which I could spread on some bread. I’m not telling this story to expose or even judge anyone. Instead, I’m telling it to spotlight how we often are completely unaware that there isn’t even one single sheer plant-based dish on the table. I also never really noticed until that day, as I used to eat most of it before myself (except for meat).

A lot of things have changed since then: at one of the last family gatherings I was caught unaware by one family member who got some vegan patties at the organic store, pan seared and brought them to the party for me, just to make sure „I’d get something to eat, too.“ While I courageously took a bite of the patty, he explained how he had pan seared it in some ghee (= clarified butter = animal product). He basically assumed that I would love ghee which is currently promoted as „healthy“ because I was also joining in the „vegan trend“ 😉 Of course, I didn’t say anything, ate the patty and was utterly grateful about the fact that he had thought of me – especially because I never expected it.

By the way, there’s a post already with tips on what to serve your vegan friends at a BBQ. And then there’s one with ideas for vegan finger food (maybe for your next party? New Year’s is around the corner).

Once again: Most of the time I would bring something to eat (enough for everyone to try) and I would never expect any special treatment. However, of course, I’d be pleased if someone is considerate. Whenever I’m a host, I personally care about my guests who have allergies or for whatever other personal reasons don’t want to eat a certain thing. For instance, I considered two of my friends who don’t like onions simply by leaving onions out of every single one of my finger food dishes. It’s the little things that can make someone’s day. With this article, I want to show you how simple it really is. By the way, every recipe mentioned is approved by vegans and non-vegans alike 😉

Not so obvious but also not vegan

Especially ready-made products often contain additives which aren’t vegan. If you don’t only use fresh ingredients, you might want to double check if the ingredients are all vegan, e.g. on this site. But don’t let it get to yourself! Just as I wanted to express with the vegan patty story: it’s the thought that counts.

What does a vegan eat anyway?

A lot of things have changed the past years. Vegan groceries have become omnipresent. By now, not only oat milk has made it to the shelf of regular grocery stores, but also vegan yogurt, cream and a ton of vegan completed products.

You can find a huge range of vegan groceries online as well. This way you can also find specific vegan foods, like candy for Christmas.

Not everyone is into mock meat

A whole new industry is booming these days. Vegan meals just pop up everywhere now. However, not all of them are healthy (most of them probably aren’t) and may even be grays to some vegans. Just as not everyone who eats plant-based, wants to eat a vegan mock meat burger which – taste and consistency wise – doesn’t really differ much from a real burger. Others, on the other hand, may love seitan and Co. So as always, the best way to find out is simply by asking.

Some inspiration for what to serve your vegan guests

Depending on the time and effort you want to spend, you can find the following different categories (simply click to directly go to the particular suggestions):

Then again I split the categories as follows:

No (extra) effort at all

The easiest way would be to leave animal products out of (anyway vegetarian) dishes completely (like the eggs in a salad, just serve them on the side for everyone else; potato salad without bacon and so on). Another idea is to simply substitute ingredients with plant-based alternatives (which also non-vegans can eat…), e.g. soup made with margarine/ oil and coconut milk or soy/ oat cream. You could also make herb butter with margarine instead of dairy butter. 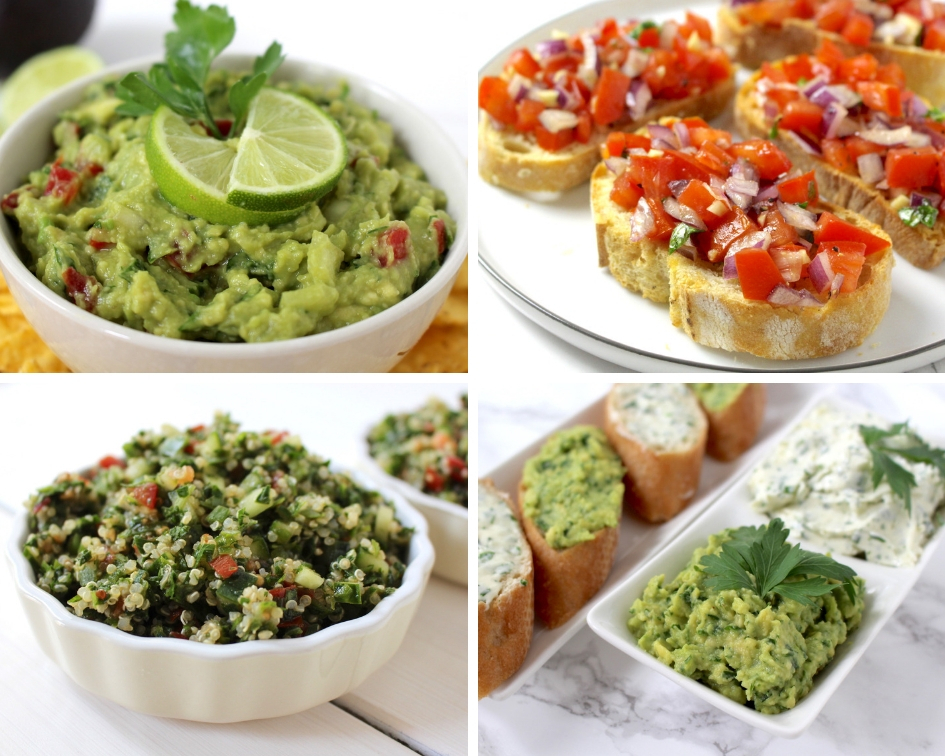 “A little plant-based never hurt nobody!” Why not serve dishes which, in their original form, are vegan anyway? Maybe you can’t come up with anything right away, so here are a few ideas (everything you see in the picture above by the way):

While these are just a few examples of traditional recipes, which are vegan originally, the list can be continued eternally.

Here’s what you can serve a vegan with minimal effort – if only little financial effort and maybe the effort of reading ingredients labels. Generally, you can sauté everything, like vegetables or vegan (store-bought) patties, in oil (or vegan butter) instead of butter.

Serve fresh fruit and vegetables and maybe an avocado, some jam and/ or plant-based spread.

You can basically get vegan chocolate, cookies (Oreos are accidentally vegan by the way) or cake everywhere nowadays.
Potato chips, pretzel sticks often are vegan, too. Nuts and dried fruit are always a good idea.

Things that come into mind right away: vegan pesto, margarine instead of butter, spreads, maybe vegan completed products like patties made of beans, falafel etc.
Antipasti is also a good idea: olives, dried tomatoes, preserved peppers, artichokes, maybe some pickles and some baguette or ciabatta with it.

Here’s where you can find simple recipes, e.g. for sides or spreads which you can prepare within minutes (and in advance).

If you love Nutella, drop everything and give this healthier version a try! #foodporn
You need 6 ingredients, 1 minute, a bowl and a spoon. That’s it!

This is the simplified version of my already existing Nutella recipe with homemade hazelnut butter: http://bit.ly/2o1BJhr 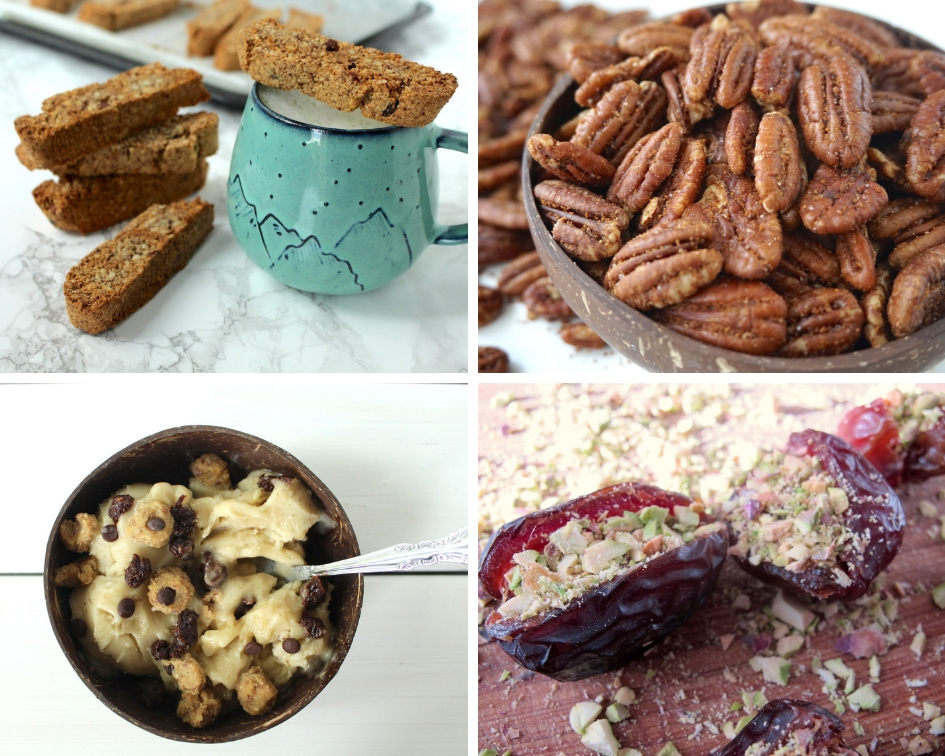 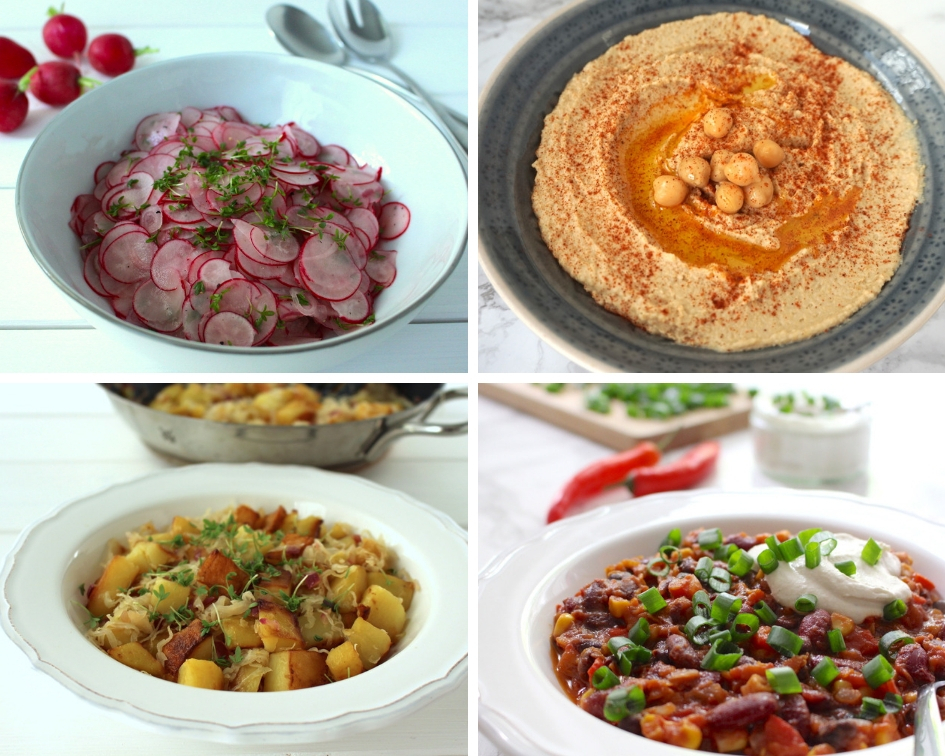 A little more festive (e.g. for Christmas or Thanksgiving) 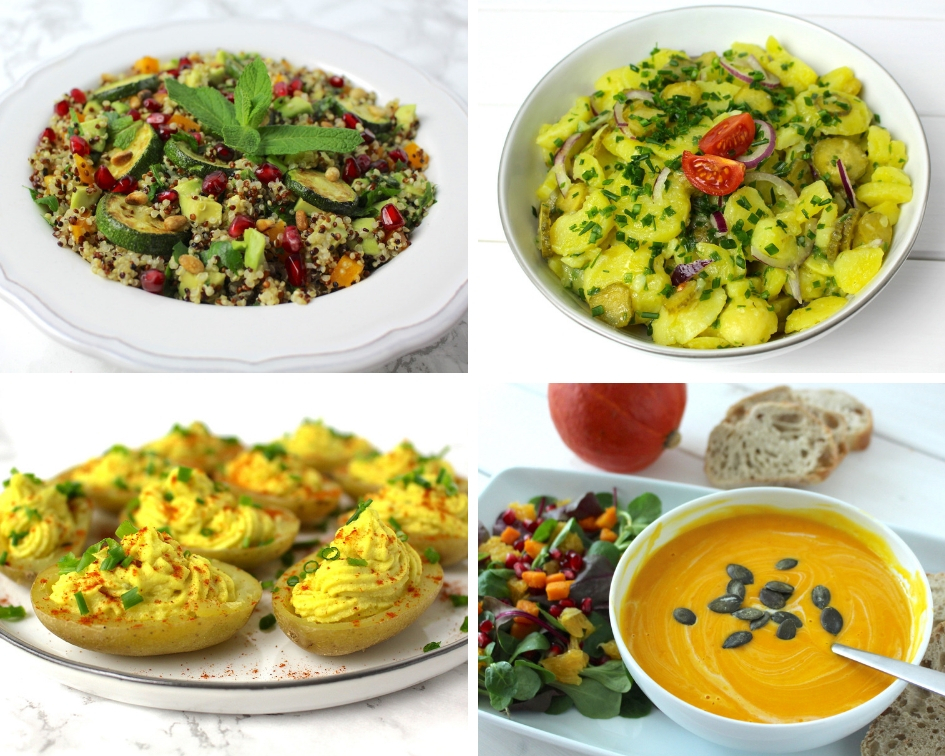 If you like to cook and are open to new adventures in the kitchen, here are some ideas of whole vegan dishes that you could make.

Instructions:
1. Combine dry ingredients (flour, baking powder, sugar, vanilla and salt) in a bowl. Add milk and vinegar (and vanilla extract if using) and whisk until mixture is smooth.
2. Let batter rest for about 5 minutes.
3. Spoon one pancakes’ worth of the mixture onto a pan over medium heat. Flip as soon as the edges turn golden brown and the top begins to bubble. Transfer on a plate or into a 200 °F oven to keep warm. Repeat cooking the remaining batter. 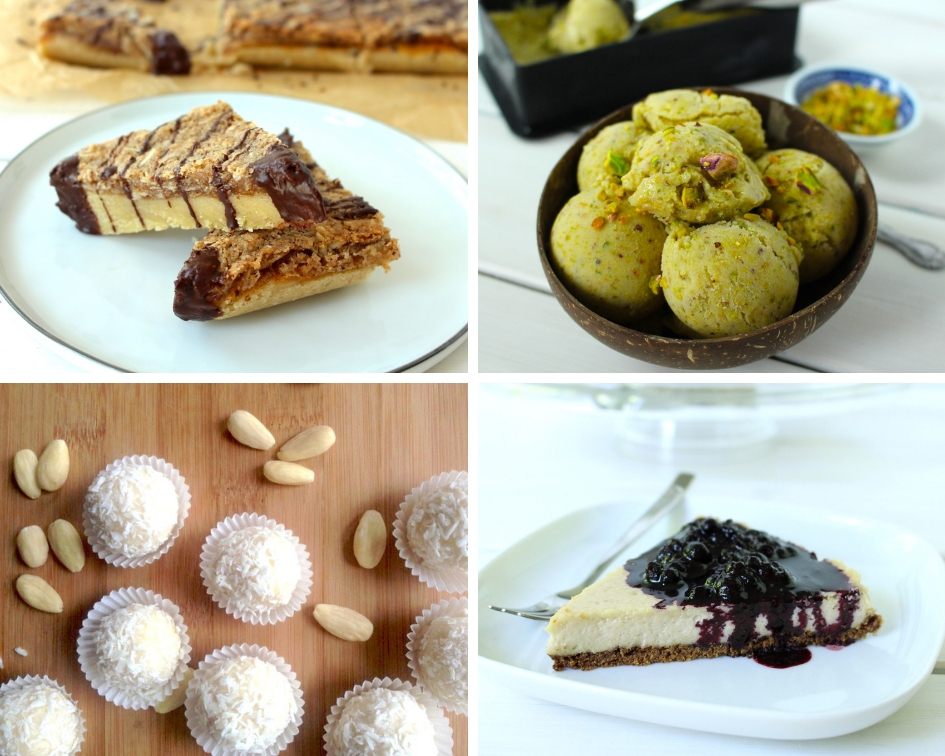 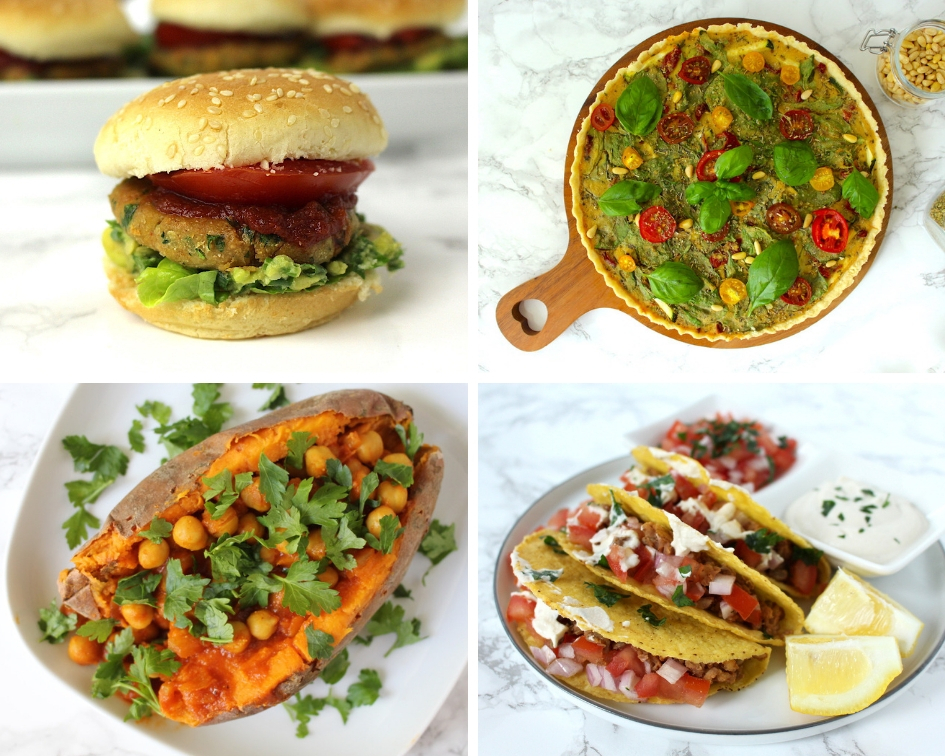 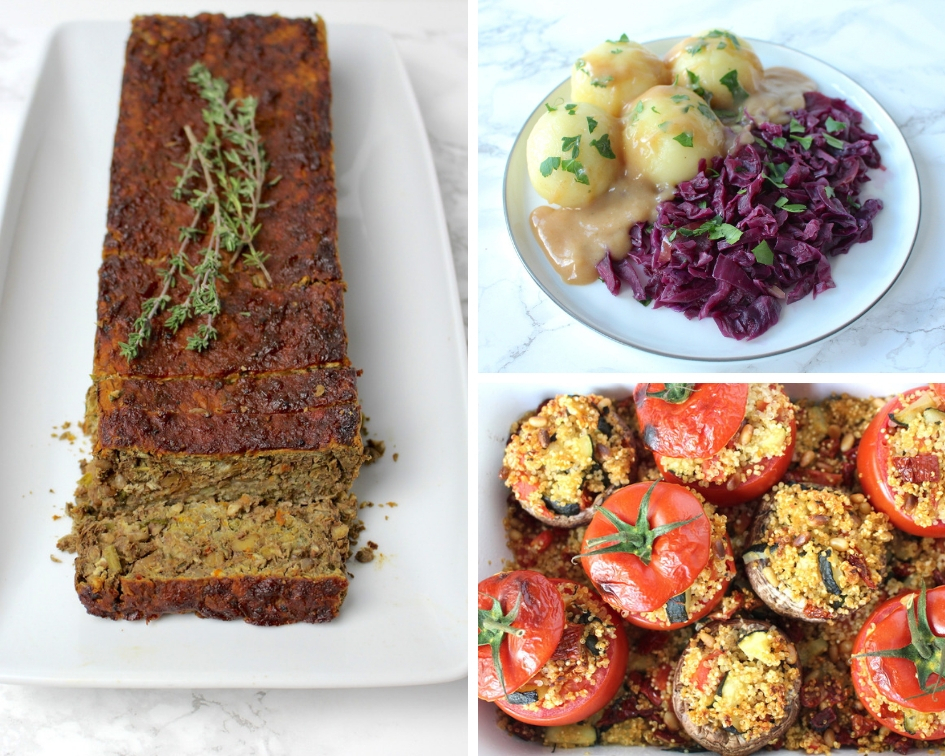 Do you have any more tips or suggestions when it comes to vegan guests? Leave a comment!

How to Eat Vegan at Any Restaurant /...

The One Goal You Need to Achieve All...