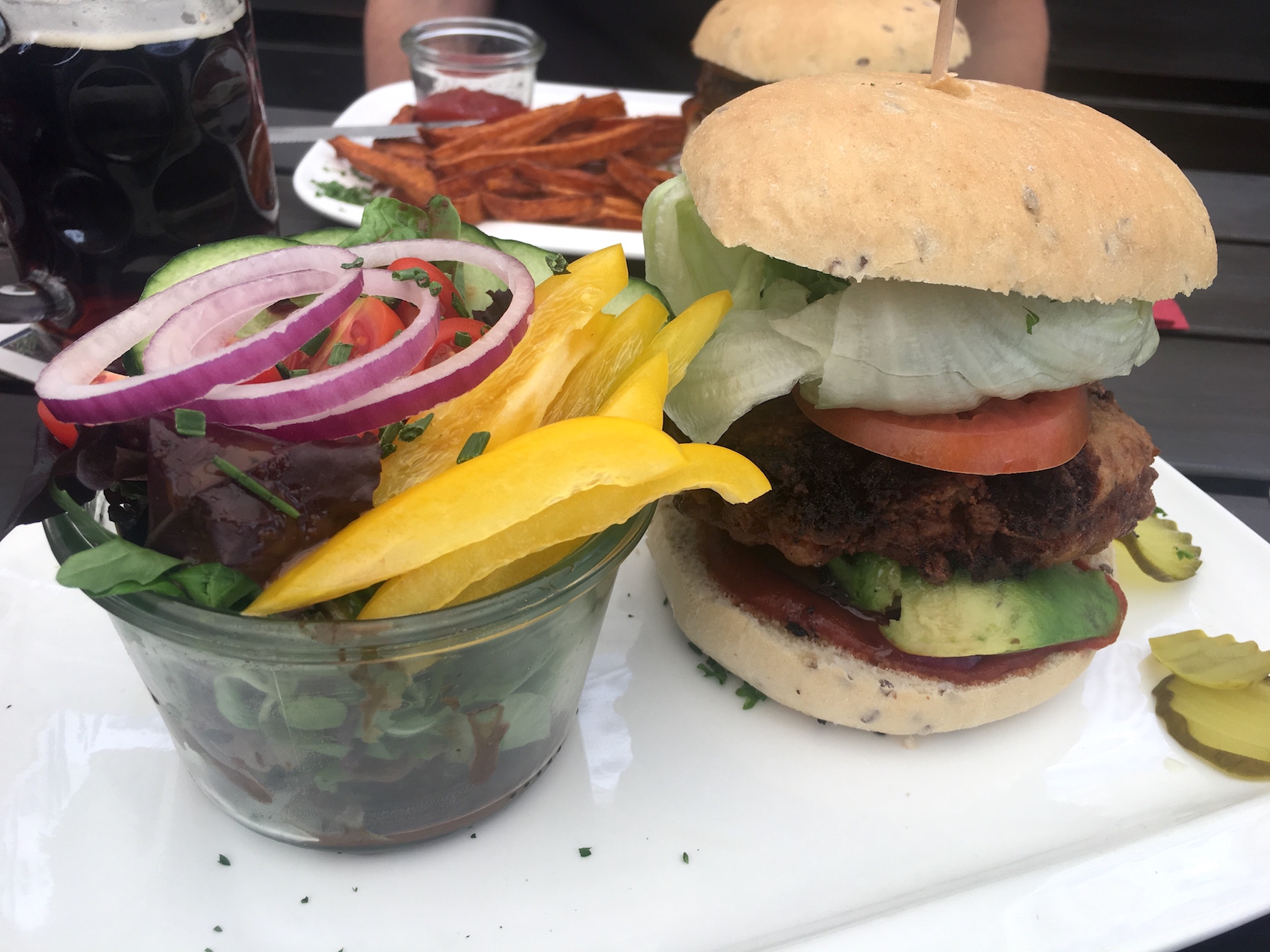 Sometimes you just can’t find the time to prepare yourself a wholefood plant-based meal to take to work. Sometimes you’re invited for dinner at a restaurant that doesn’t offer any vegan dishes. Or you want to go out to eat with family and friends who don’t eat plant-based. No problem at all, if you vaguely know what to be mindful of and what’s possible in general. I usually find something in any menu, at least a dish that’s easy to “veganize”. The German/ plain cuisine is the only one that I still struggle with…

As a basic principle, you should always demand. I know this can be annoying, since you don’t want to put anyone out. Admittedly, I don’t like doing that either, especially when I’m with people who don’t know me and the vegan diet well. But (as we all know, but often ignore): demand – in this case literally – determines supply. The more guests at a restaurant ask for a plant-based dish, the more the need to act for restaurateurs. It’s very important not to ask for “vegan” dishes, though, as not everyone will understand it and may confuse or range it with the vegetarian diet. Preferably tell the them what you don’t eat (no dairy, eggs, etc.) and come up with suggestions of what’s possible, e.g. vegetables, potatoes, bouillon, pasta without cheese sauce/ egg, … You may also want to ask if they cook and fry with butter/ lard or oil.

Check the Online Menu or Call the Restaurant

Before putting yourself to great inconvenience of asking for vegan options at the restaurant, you can have a look at the menu online beforehand. If you can’t find anything vegan or something that’s easy to veganize (like pizza, pasta or salad without cheese etc.), you could just give the restaurant a call and ask for possibilities. It would seem the thing to do if you’d feel uncomfortable in front of others, e.g. at a business lunch.

In most cases, “veganizing” a dish doesn’t mean to create anything extra for you, but instead is about leaving ingredients out. If you find yourself at a any restaurant: with these tips, you’ll find one or another dish which happens to be vegan anyway or could be veganized easily.

Vegan at an Indian Restaurant

Indian restaurants are probably the easiest when it comes to vegan dishes, as a lot of them are at least vegetarian. Sauces are mostly made with coconut milk – if you want to play it safe, you may want to ask again. If possible (and it usually is), order dishes without paneer (cheese) and butter or ghee (clarified butter).

Vegan at an Italian Restaurant

Fortunately Italians, in my experience that is, are pretty flexible. Every good Italian restaurant makes pizza dough with only flour, yeast, water and oil. If you really want to make sure that there’s no egg or milk inside, just ask. This way you can order veggie pizza without cheese and ask if you could get more marinara instead. Often there’s also some chili- or olive oil on the table which you can add. Usually, the bread that they serve at Italian restaurants happens to be vegan, too. Same goes for classical Italian pasta, as the dough is originally made of semolina, without eggs. Whenever I’m at an Italian restaurant, I usually order everything “without parmesan” because it’s often sprinkled on top of the dish before serving.

Vegan at a Chinese or Thai Restaurant

Traditionally, Asians don’t cook with dairy products. However, beyond the continent of Asia, it makes sense to ask, since restaurants are often fitted to the western taste. You should also ask if fish sauce is being used in their dishes.

Vegan at a Japanese Restaurant

Next to sushi, filled with vegetables or avocado, Japanese restaurants typically offer a few starters which happen to be vegan. You should also ask if fish sauce or flakes are used to prepare the dishes. If there’s tempura with vegetables, be sure to ask if the tempura dough contains egg. Unfortunately that’s the case most of the time, but with a bit of luck (or with constant demand ;-)) you can get tempura dough without egg one day.

Vegan at a Greek Restaurant

To be honest, it does get a bit harder here. Greeks just really like to eat meat. There may be one or two vegetarian dishes on the menu which can be “veganized”. Alternatively, you could order a few sides, like grilled veggies, fava and garlic bread.

Vegan at a Persian/ Afghan Restaurant

Persian also like to eat meat – lamb and fish being among their favorites. However, they’ll also always have rice, grilled veggies and hummus. Sabzi polow is rice with herbs and can be ordered without meat or fish (as long as the original dish isn’t rice with minced meat, because then it has probably been prepared together in one single pot). If there really isn’t any option whatsoever, you could always order rice with grilled veggies and sumac. You may want to let them know that you want the rice to be made without butter (bedune kare) and egg (bedune toxm-e morġ). The Afghan cuisine is pretty similar to the Persian. Here you can also at least order rice with veggies without butter and egg.

Vegan at an Ethiopian Restaurant

I know what you’re thinking: “African food must include a lot of meat”. These were my thoughts at least until I was proven wrong at Cafe Omo, a very good Ethiopian restaurant in Munich. If you’ve never eaten at an African restaurant (or in an African country, of course), you might be surprised by the way to eat there: with your hands. Technically speaking, you’ll eat with injera, the bread which acts as plate and cutlery at the same time. You just tear a piece of the sour dough flat breat and use it to grab a bite-size portion of the dish. And it’s so delicious!

Vegan at a Mexican Restaurant

To be honest, I haven’t found a really good Mexican restaurant outside of Mexico yet. However, in case you end up at one: tacos and enchiladas with vegetables should generally be available. The same goes for the spicy red sauces (salsas) which are usually based on tomatoes only. You’ll probably also find guacamole and frijoles.

No matter, if it happens after a long night out or when you find yourself at a train station in a rush – we’ve all been there at least once: starving at the next best snack stall. A vegan option would always be falafel with veggies, stuffed into flat bread and tahini (sesame) sauce. Obviously, you wouldn’t want any yoghurt sauce. Unfortunately, the flat bread is brushed with eggs sometimes (pretty sure when it’s shiny). Just ask to be sure it isn’t.

Vegan at a German/ Plain Restaurant

This seems to be the hardest option. Not only because there isn’t much choice without meat, cheese or egg traditionally, but most notably because these restaurants (especially in Bavaria) aren’t really cooperative, to put it diplomatically. “No have, no can give! Only what’s on the menu” are things you get thrown at with. Service wasteland Germany? You bet! This prejudice proves well-founded in exactly these kind of restaurants. Anyway, you should keep asking if the food is cooked with butter/ lard, veggie or meat stock and if the pasta dough is without egg. At the risk of being dissed Bavarian or Berlin style: always ask, because demand determines supply.

Vegan at a Beer Garden

The great and unique thing about a Bavarian beer garden is that you can bring your own food – given that you buy a drink. Otherwise, options are pretty meagre at beer gardens as of yet. So far I found as few as some fruit and radish. Sometimes there’s a potato salad which is dressed with vinegar, oil and veggie stock only. Pretzels are normally vegan if they aren’t made with lard (yes, that’s a thing in Bavaria).

By the way, beer – if made under German purity law – happens to be vegan, too. This means it’s made of hop, malt, yeast and water.

Vegan at Restaurants with Multi Cuisines

Lastly there are these restaurants which offer all kinds of food. Is there a term for them? Anyway, they often have one of the following: a vegan (or easy to veganize) burger, veggie curry with coconut milk, salads or rice dishes. A combination of sides like grilled veggies, sweet potato fries and a salad or some such would probably be possible as well. Since restaurants have to mark allergens in many countries by now, it shouldn’t be a problem to identify what options to choose from.

In another blog post I already pointed out that – neither on a plane (lacking flexibility) nor in private life – you can expect the food to be customized. While one needs to be proactive in these spheres, it’s not only impossible at restaurants (e.g. to bring your own food) but also unnecessary. After all, you pay for the food and there’s a chef who should be able to meet customer needs. With that said, I do not intend to say that an Italian chef should cook an Indian dish simply because I feel like eating it. Of course, it should always stay within reason. However, good restaurants should be able to accommodate a wish for, say, pasta with a veggie sauce without cheese. And when you’ve been treated well, you should always share this experience.

As you can see, there are plenty to options if you’re a little flexible and maybe do a little research in advance. The good news is that the market keeps growing and the options get better every day.

Any other tips and tricks? Leave them in the comment section below!

Help! There’s a Vegan Coming for Dinner! What...

The One Goal You Need to Achieve All...