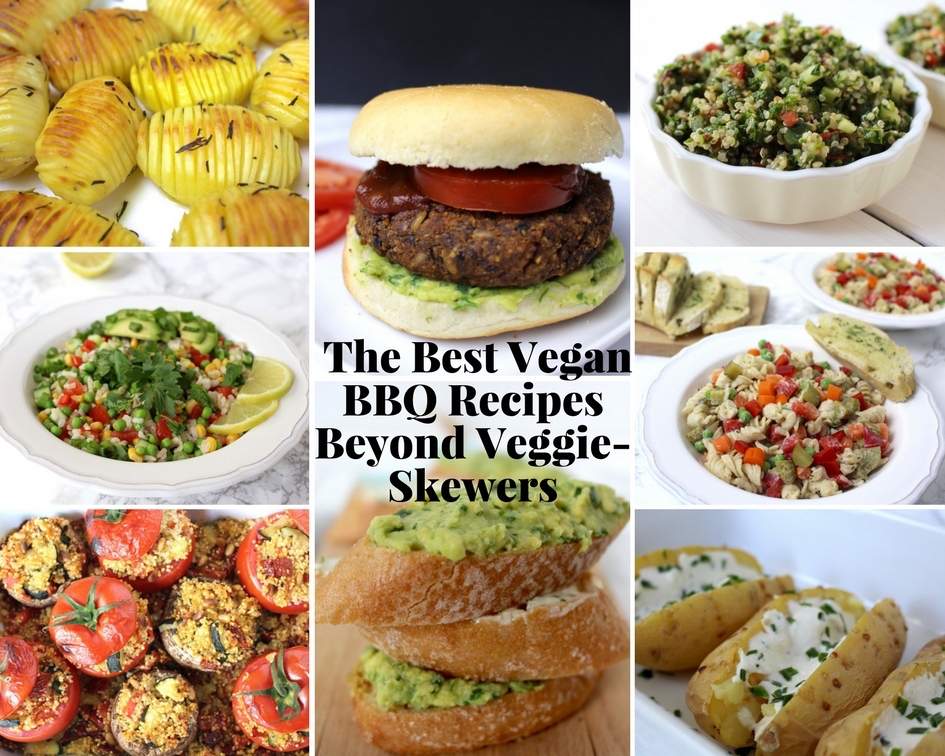 Having a vegan BBQ doesn’t mean, there will only be veggie skewers sizzling on the grill. On the contrary, dishes which can actually be grilled or which make very tasty vegan BBQ sides. No matter if you’re following a plant-based diet yourself, invite vegans to your BBQ or want to bring something to a vegan barbecue: here are my 12 (+1) best ways to embrace vegan inspired meals on the barbecue. Whether you’re a meat-eater or not – a flavor-packed burger, vibrant veggies and filling sides make vegan BBQs a joy to eat for anyone. Vegan BBQ: There’s got to be a burger There’s got to be a Burger? No problem! Black beans are the heroes in this insanely delicious burger. Together with the rice, the beans give this burger the right texture and make it really satisfying, whereas the seasoning and the roasted nuts spice it up on target. Serve it with a burger bun or just on top of a salad, but by all means with this BBQ sauce. I love having this veggie patty together with this ridiculously good BBQ sauce and some avocado herb cream on top of a salad. If the classic burger is more your vibe, serve it with a burger bun, tomato and salad leafs.

No vegan BBQ without barbecue sauce As mentioned above, you’ll need this barbecue sauce for the burger patties themselves (and as a condiment). Ditch the bottled BBQ sauce for the homemade version. It’s a little sweet, a little spicy and makes any grilled dish. So even if you don’t make the burgers, you have got to make this BBQ sauce, trust me. Who says healthy food that tastes great has to be complicated? Let me tell you, it doesn’t! Most times it’s the simple things that are the best, really! This baked potato is the ultimate proof. It’s one of my favorite recipes and at the same time, one of the easiest. I just place the potato in the oven or on a grill and let it do it’s job. To me a barbecue isn’t complete without baked potatoes. If you don’t agree with me here, I’m sure you do when I say, a baked potato just isn’t complete without sour cream. Speaking of sour cream…I’m still fascinated by how insanely delicious throwing a few simple ingredients together can be. Here’s a very simple yet so delicious vegan sour cream recipe you’ll never want to live without. Keep a jar of this in your fridge and you’ll have something to add to all of your dishes – especially now during BBQ season. Not only do these hasselback potatoes look very tasty, they need a minimum of effort and few ingredients to make. These potatoes go really well with grilled vegetables like asparagus, veggie skewers or else these Mediterranean stuffed tomatoes. I also love to eat them with a dip like a simple avocado herb butter or my irresistible cashew sour cream.

Having a BBQ with vegans doesn’t have to be stuffy with these stuffed tomatoes and mushrooms (ha!). Because as much as I love veggie skewers, on a permanent basis these will be quite boring, don’t you think? Especially when there’s so much more you could grill just as you’d cook it in the oven. These Mediterranean stuffed tomatoes and portobello mushrooms complement the other BBQ recipes perfectly. And yes, it’s a super easy recipe: just prepare the quinoa or millet stuffing, then stuff tomatoes and mushrooms and grill on a veggie pan or broil on a baking dish in the oven. Tabouleh is a refreshing light Lebanese salad. I love having it as a side to well, pretty much everything. It makes a great side for the BBQ. Parsley and lemons (or limes) are the heroes in this dish and make it a very refreshing salad – perfect for those hot summer day. There are many different versions (e.g. with or without mint leaves, red or green onion etc.). Traditionally this salad is made with bulgur, but I like it a lot better with quinoa. If soup is one of the most comforting winter meals, cold pasta salad is one of the most comforting summer meals – to me anyway. As well as a hearty potato salad, it’s just essential for any BBQ. As the one who never really liked meat, I used to bring either the a Persian potato salad or this pasta salad to BBQs. Everyone always loved it and it was actually gone before the grilled stuff was nowhere near ready yet. The only difference of the pasta salad as I make it today is the homemade vegan mayo, which I add instead of regular mayonnaise. But don’t worry, it tastes just as delicious! This is the Persian potato salad, I just talked about. Olivieh salad is one of the most popular dishes in Iran. There it’s not only eaten as a salad but also used as a filling for sandwiches. It also used to be one of those dishes that my dad would make quite often – especially when we were invited to a party or such. I wasn’t a huge fan of it at that time since I had to peel all the potatoes… But in the end it was always worth it, because everyone really loved it. Rice salad may not be as common as pasta or potato salad, but that’s actually why I like it – it breaks the routine. Not only is this a great side at any BBQ but it can actually be eaten on its own. The rice makes it very filling and the vegetables make it fresh and crisp. It’s one of those salads, that I can’t stop eating, even when I’m full already. Just as the other salads it can be, or better should be, prepared in advance, so that all of the great aromas can diffuse whilst marinating.

In Germany there’s probably no BBQ without an herb butter baguette. In the end it’s what we cling to whilst patiently waiting for the best veggie burger sizzling on the grill. Even when you’re eating plant-based, you don’t have to go without it, simply by substituting regular butter with vegan butter, also called margarine. It’s not something I’d eat everyday either, but as I said before, with BBQs it’s in the bag. What I do make quite often, however, is a delicious avocado herb “butter” or dip. If you want it to be more on the healthier side, you may consider making this spread instead of the herb butter with margarine. It’s made really fast and is also very nutritious. My grandma used to make this before anyone else here knew anything about avocados and it’s always been a winner. Plus, it’s a refreshing alternative to guacamole… …but you can’t go wrong with guacamole! This version is authentically Mexican. However, you could add, leave out or substitute the ingredients just as you like (e.g. jalapeño, chili, garlic etc.). (If you really don’t like cilantro, you can use parsley instead.) No matter if there will be kids attending the barbecue or if you have a sweet tooth yourself, that you want to satisfy without indulging in heavy, rich desserts: this perfect summer fruit salad is naturally sweet and refreshing at the same time. The salad can be prepared and marinated in the fridge until serving.

Having a vegan BBQ doesn’t have to be complicated or boring. These are just a few ideas to give you some inspiration. I love to be inspired myself, so be sure to leave a comment below sharing your favorite plant-based BBQ dishes! ?

I hope you love these recipes – please let me know in the comment section below! If you make any of these, make sure to take a photo and share it on my Facebook page or on Instagram, using the hashtag #minamadefood. Oh and don’t forget to tag me (@thisisminamade) so that I can see your creations!